From Parlour to War - Part 1 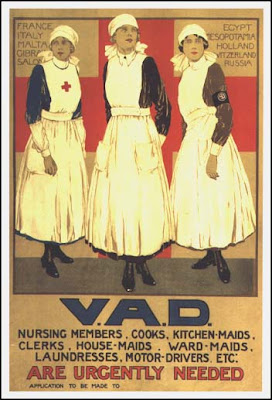 “Short of actually going to bed with [the men], there was hardly an intimate service that I did not perform for one or another in the course of four years,” wrote Vera Brittain, one of the most famous Voluntary Aid Detachment (VAD) nurses of the First World War, in her memoir, Testament of Youth. She stated that this gave her an “early release from the sex-inhibitions... [of] the Victorian tradition which up to 1914 dictated that a young woman should know nothing of men but their faces and their clothes until marriage.”

Like Vera, VADs were generally from genteel, sheltered, and chaperoned backgrounds. Some were aristocrats, like Lady Diana Manners – the “Princess Di” of her day - reputedly the most beautiful woman in England and expected to marry the Prince of Wales. Only the middle and upper classes could afford to work for free, and to pay for the courses and exams that were required to become a VAD. Growing up with servants, many of these young women had never had to wash a plate or boil an egg. One girl related how amusing it was to serve tea at the hospital and then return home to have her own tea served by the parlour maid.

About 2000 Canadian women became VAD nurses, with over 500 seeing service in England and France with the British Red Cross. But we have few records of their experiences. Of the 23,000 British VADs, several, like Vera and Lady Diana, left a rich legacy of memories.

It’s hard for us to believe now that there was cheering in the streets when Canada went to war in August of 1914. Young men, overwhelmed by patriotism, duty, and a keen sense of adventure, flocked to join up. Within two months, the first 32,000 headed overseas. Women did “their bit” by raising money, rolling bandages, sewing, and so forth, but for some, that wasn’t enough. Like their brothers and sweethearts, energetic young women craved the excitement and independence that “their war” offered. But the only women allowed near the front lines were nurses.

The white-veiled “Angels of Mercy” with red crosses emblazoned across their breasts became enduring symbols of these nurturing, heroic healers. What higher role could a woman achieve in this cataclysmic conflict than to comfort and tend the shattered bodies of valiant men?

However, it took three years of hospital apprenticeship to become a qualified nursing “Sister”. So when 3000 Sisters became part of the Canadian Army Medical Corps, there was a lack of trained nurses for the many new convalescent hospitals that treated the burgeoning numbers of maimed soldiers returning from Europe. (Canada had about 170,000 wounded.) With only a few weeks of training by St. John Ambulance in First Aid and Home Nursing, women over 20 became qualified to work under the guidance of professional nurses.

They learned quickly on the job. While VADs spent much of their time changing linens, sterilizing equipment, serving meals, and so forth, they were just as readily asked to hold down the exposed intestines of a mortally wounded soldier, as was Canadian Doreen Gery on her first day in a British military hospital. Her protest to the Sister that she would rather die than do that, earned the retort, “Well, die then! You’re no good to me if you can’t do the work!” Like other VADs, Doreen stoically got on with the job. Giving up was considered the equivalent of cowardice in a soldier.
Nurses treated horrific injuries that would haunt them for years. There were boys with their faces blown away, brains exposed, limbs missing. Constantly they dealt with fetid, suppurating wounds, “a mass of putrid muscle rotting with gas gangrene”, which usually resulted in amputations. “I gripped his leg well above the knee, and the solution of Eusol and Peroxide was poured onto the stump and pus was pouring over my hands…. It was the only time I ever disgraced myself like that,” one VAD reported after almost fainting. [The Roses of No Man's Land, Lyn Macdonald]

When endless rivers of casualties overwhelmed staff, there was little difference between what was expected of VADs and trained nurses. VADs were often left in charge of as many as 100 dangerously ill men, looking out for “amputation bleedings, death…”

It was shocking, exhausting, and hazardous work, but with the perks of newfound independence, adventure, and sometimes romance.

Watch for Part 2 next week.
Posted by Gabriele Wills at 11:44 AM