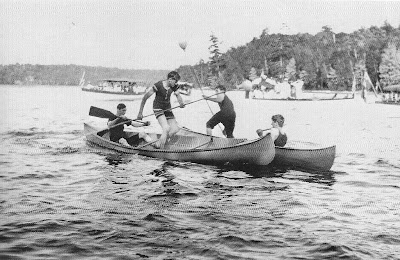 It’s that special time of year in Canada - a long weekend, celebrating, in essence, that summer is only half over. And for those lucky enough to be at a lakeside cottage or resort, it can also mean watching or participating in Regattas. These are friendly, but often fierce competitions among amateurs in such traditional sports as canoeing, swimming, and sailing, and also quirkier events such as tilting - as seen in the photo above - and canoe races without paddles. Regattas can be held by just a few neighbours or run by organizations, such as the Muskoka Lakes Association (MLA), which has sponsored them annually for over a century.
The MLA Regatta was already so popular prior to World War 1 that people came from Toronto just for the day, and special steamships and overnight trains took them home again. Hundreds of boats sat at anchor or were moored many deep at the docks and islands within view of the activities. At the end of the day, various resorts held dances because even the largest of them, The Royal Muskoka Hotel, couldn’t accommodate all the revelers.
Canada’s Prime Minister, Sir Robert Borden, was holidaying at the Royal Muskoka in late July of 1914. He was to have presented the prizes at the MLA Regatta, but was suddenly summoned to Ottawa a few days before. By the end of that long weekend, Canada and the world were at war.
That’s the Regatta that I describe in my novel, The Summer Before The Storm - the last for some of my characters who go off to engage in a more deadly battle.

Posted by Gabriele Wills at 2:26 PM No comments: 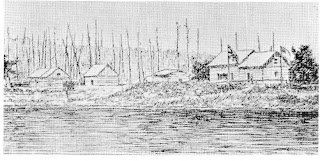 “Rowena was dumbfounded by her first glimpse of Launston Mills. Then angry. For this they had travelled more than three thousand arduous miles? For this handful of log cabins and a mill that had the audacity to give themselves a name?”
That arduous journey had involved travelling 8 weeks from Ireland in the filthy, dank hold of what became a “plague ship” when cholera swept through, killing a fifth of the passengers. After quarantine on Grosse Isle, downstream from Quebec City, Rowena O’Shaughnessy and her family spent a further two months making their way by barges and oxcarts and on foot into the primitive backwoods of Upper Canada. A land of opportunity for those who had the stamina of mind, body, and spirit to survive. 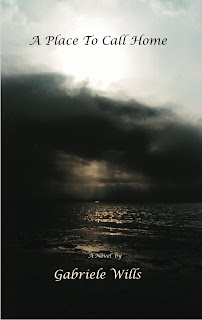 Their hardships are detailed in my first novel, A Place to Call Home, which has just come back into print.
Rowena’s complex relationship with the wealthy and powerful Launston family leads to tragedy, and eventually to redemption. Their lives are played out against a rich tapestry of events - devastating plagues, doomed rebellions, mob uprisings, religious conflict, and political unrest - many of which are based upon the history of my hometown of Lindsay.
This is a tale of passionate people and stormy relationships, of unrequited and illicit love, of betrayals and revenge. It is a story of courage, and the undaunted human spirit that manages to survive and surmount appalling conditions and tragedies. It is a celebration of the achievements of the remarkable pioneers who carved thriving communities out of an inhospitable wilderness.
Here’s what Writer's Digest Magazine had to say about it:
"A Place To Call Home is a gripping and fascinating saga about an Irish family's immigration to Canada and the building and founding of the [fictional] Ontario town called Launston Mills. Wills masterfully traces the development of the town, told through the eyes of Irish immigrant, Rowena, and her son, Keir. The historical facts were flawlessly researched, but rather than it reading like a series of facts, Wills peopled the book with vivid and very real characters whose experiences captivate the reader. .... An exceptionally well-told story... A Place To Call Home offers a delightful glimpse into Canada's past, told through characters who come to life and jump off the page."
Find out more about the novel, including reviews and readers' comments, on my website Mindshadows.com, where books can also be purchased online. The novel is also available as and E-book for the Kindle. Check it out here.

Posted by Gabriele Wills at 1:21 PM No comments:

Summer Fun a Century Ago 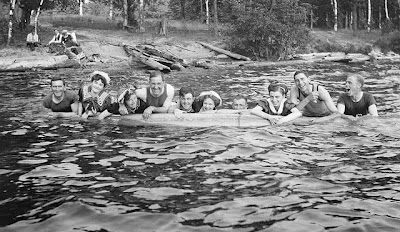 In my June 23rd posting we saw the sedate side of summer life in Muskoka’s Age of Elegance, but there were plenty of activities to wile away the hot days. What better than swimming with friends? Although, unlike the people in these Frank Micklethwaite photos, I’d prefer less enveloping bathing suits, especially in this current heat wave. 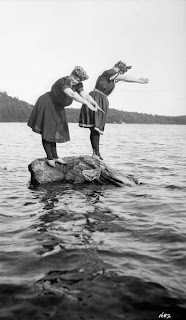 Rowing and canoeing were popular, even with women wearing floor-length dresses and picture hats. 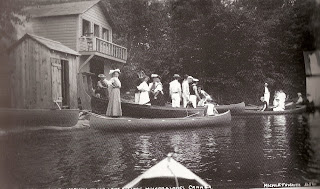 Most important were the Regattas, for which you practiced all summer, hoping to add to the family showcase on the mantelpiece - trophies for sailing, rowing, and canoe races, swimming, diving, canoe jousting competitions, and so forth. 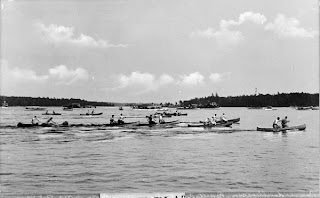 And for the wealthy and adventuresome in the 1920s and on, there were the motorboat races. 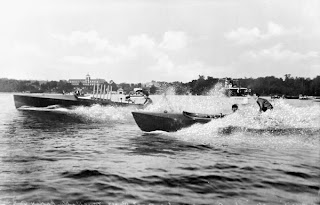 This ethos is captured in my Muskoka Novels, The Summer Before The Storm and Elusive Dawn, and continues in Book 3, which should be in print next summer.

Posted by Gabriele Wills at 9:43 AM No comments: