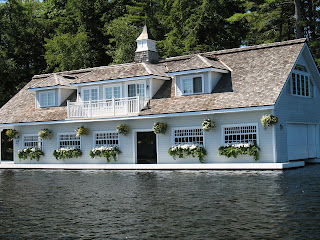 On my recent research trip to the Muskoka lakes, I took a delightful cruise on a 1920s-style yacht around the area known as Millionaires’ Row. It was here, over a century ago, that wealthy Americans began building their summer homes or “cottages”. Many were from Pittsburgh; some were and still are among the richest families in America. They ventured north to the pristine wilderness of the Canadian Shield to escape the industrial pollution and stifling heat of summer, bringing along a bevy of servants (one family had 27!), and staying for two or three months. Many of these well-preserved cottages are still in the family, and several generations have grown up on the lakes and been enchanted by the mystique of this beautiful district.

The boathouses are as fanciful as the gingerbread cottages, and usually have party rooms or living quarters above, often for the children or guests. (One is pictured above.) Many of these still shelter aquatic jewels - exquisite boats handcrafted by one of the world-renowned Muskoka boat builders. With vintage launches and grand cottages little changed, it’s easy to imagine the genteel life on these lakes a century ago.

To book a tour on the Idyllwood yacht, visit Sunset Cruises.

My Muskoka Novels will also transport you to this elegant era.

Posted by Gabriele Wills at 1:51 PM No comments:

Soundtracks of our lives

Even more than language (see previous post), music evokes an era - ragtime pre-WW1, jazz in the ‘20s, the Beatles in the ‘60s.

We all have soundtracks for our lives - music that transports us in a heartbeat to a particular time and place whenever we hear it. That applies equally to fictional characters. Throughout my “Muskoka Novels”, appropriate lyrics of popular songs are used for dramatic or ironic effect, and in character and relationship development.

During my research, I came across ragtime historian and award-winning performer Bill Edwards’ website, and became enchanted by his masterful renditions of the hit tunes of the pre- and WW1 eras. It helped me to immerse myself in the mindset for writing about that time.

I thought it would enhance the reading experience to have a companion CD of that music to accompany each novel. Bill readily agreed to produce them. So readers can enjoy the music to which characters dance and flirt - songs that evoke romance as well as themes in the storyline.

When I mentioned that one of my characters wrote a hit Broadway musical in Elusive Dawn, Bill asked me if I had any lyrics for the signature tune, so I sent a few lines that had been playing around in my head. He expanded those into a song in the style of the era, and has recorded it for the Elusive Dawn CD. It's entitled "I'm Over the Moon For You". I just love how fact and fiction intertwine! And I’m eagerly awaiting the release of this latest CD.

Visit NovelTunes for more info about the “Music for Muskoka” CD that accompanies The Summer Before The Storm.

Posted by Gabriele Wills at 8:52 AM No comments:

Slang and colloquialisms help to define an era. What’s “cool” today was “far out” in the 1950s, “the bee’s knees” in the 1920s, and “swell” in the 1900s. “Cool” actually originated in about 1933, but seems so modern that I wonder if readers would feel that it was an anachronism if it were used in a novel set at that time.

Of course, a lot of slang is in common usage for more than a decade or two.  Although we may think these more contemporary than pre-WW1, expressions such as “not on your life”, “frigging”, “necking”, and “boyfriend” were already in use at that time.

You could have “given someone a piece of your mind” back in 1861, or “pi-jawed” them after 1891. It’s the delightful and mostly obsolete expressions like the latter that add a sense of historical place to novels. Something good is surely more fun when it’s “crackerjack”. A “top-hole” “chap” is the best kind of friend, and can also be called a “stout fellow”, or a “jolly”, “howling”, or “cracking” “good egg”.

Words are such fun, aren’t they? I use several sources in my research, but the Oxford Dictionary of Slang is “the cat’s pajamas”!

Posted by Gabriele Wills at 12:37 PM No comments:

The “morning dock” at our family cottage is at the base of a small bluff accessed by about a dozen stairs. As I once savoured the solitude of sitting there watching a summer sunrise, I was startled by a thundering noise approaching me, the ground trembling. I leapt to my feet to see a herd of cows charging for the steps. I screamed. Equally shocked, they seemed to screech to a halt, like cartoon characters. Heart still pounding, I shooed them away.

Cows at the cottage? Yup! I mentioned in my last posting that there had once been a farm on our island. There is still a meadow in the centre, and heifers are brought over every summer to graze there. Of course cows have no respect for property, so they wander where they will, and many cottagers have put up electric fences to keep them away.

My brother and his family once awakened to what they thought was an earthquake, as the cottage was shaking. They quickly discovered that several cows had gone underneath and were scratching their backs on the beams - the building sitting on concrete tubes that left them just enough room to walk beneath. We now have screening around that.

Another time, one of the clever beasts managed to turn on the outdoor faucet so that they could all drink. Who said that cows were dumb?

Lately, there have also been bulls on the island. They are more of a concern, since they have been known to chase cottagers out for a stroll. It gives new meaning to being cautious about the “wildlife”!

Posted by Gabriele Wills at 1:33 PM No comments:

The joys and challenges of island cottaging

Lakes are moody. They can be benignly serene or exuberantly playful, happily reflecting a blue sky and scintillating with sunbeams momentarily captured by the waves. But they can also turn black and malicious. It’s at moments like this that you wish your parents had built their cottage on the mainland instead of on an island.

On brooding and windy days, when waves are belligerently frothing with white caps, docking can be virtually impossible as breakers wash over the stern of the boat and attempt to ram you into the rocks. If you can actually get to the island, it can be equally dangerous to leave, so it’s essential to be well stocked with food and refreshments. In any case, once you’ve hauled all the stuff across three kilometres of capricious water, you don’t want to have to trek back to town to pick up forgotten bread or flashlight batteries. Obviously, planning ahead is important.

So why have a cottage on an island, which is accessible for only about six months of the year? Partly because island property is significantly larger but decidedly cheaper than mainland lots. Our nearest neighbour is a ten-minute walk away through the woods. Some of the mainland cottages are packed as tightly together as suburban houses. We certainly have solitude, along with a bit more adventure.

My friend, whose family has cottaged on an island since 1879, claims that island people are different - hardier, yet more laid back. Perhaps being farther away from the distractions of modern life - the highways, cars, shopping malls - makes it easier to relax, commune with nature, pick up a book instead of the car keys. Certainly when I visit her vintage cottage, it’s like stepping back into time, and out of the frenetic present.

We’re on a 1200 acre island that was once a farm. A generation ago, the family still lived there, and the children had to go to the mainland - nearly a kilometre across the lake at the narrowest point - to attend school. So they could row over until the lake froze solid enough to walk across. But what about the transition period between open water and safe ice, I wanted to know. Seems that the children would push the rowboat and jump into it if the thin ice broke beneath them. Imagine sending your kids off to school like that every day in early winter and late spring!

So I can hardly complain about the “hardships” of island cottaging!