Lakeside Resorts - Then and Now 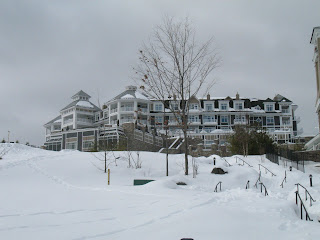 If you wanted to escape from the hot and hectic city a hundred years ago, you could board a train, whether from Toronto or Pittsburgh or beyond, and head towards the pristine beauty of the Muskoka Lakes, where you could frolic in and on the sparkling waters and breathe the pine-scented, ragweed-free air. If you didn’t have a summer home there, you could choose from nearly a hundred resorts, hotels, and inns that catered to over 5500 tourists on the three main, connected lakes. They offered dances, concerts, and even roller skating rinks to augment the many outdoor activities. Arriving at one of the railways terminals, you’d board an elegant steamship and sail to your destination, perhaps another three or four hours away. If you could afford to pay $18 or more per week, you could stay at the grandest one of all, the Royal Muskoka Hotel on Lake Rosseau.

When the Royal was built in 1901, it was touted as being the finest hotel in Canada, with all the amenities and luxuries of any city hotel, including en suite bathrooms, barber shop and hair stylist, bakery, an orchestra, and twice daily mail delivery. See a picture of the Royal here. It burned down in 1952, fire being the fate of many of these summer resorts. Others decayed or were unable to keep up with modern demands. Only a couple of the original hotels remain.

But a new one has arisen quite close to where the Royal once stood, and harkens back in style and opulence to that era. Pictured above is “The Rosseau”, a J.W. Marriott hotel, which is open all year. What surprised me was hearing cottagers opposing its development, complaining of “increased traffic” on the lake. Considering that there are only a handful of hotels that can accommodate tourists these days, that smacks of elitism - that the lakes belong only to those who can afford the overpriced cottages. They would do well to remember that it was the many hotels that helped turn Muskoka into a renowned tourist area, and undoubtedly influenced vacationers to buy property in the days when an island could cost as little as $1. We would be delighted on our non-Muskoka lake to have a hotel to which we could boat for a decent meal, or perhaps a dance, as people did in days gone by.

In the meantime, I will enjoy occasional visits to The Rosseau, since the “Grand Muskoka Hotel” in my novels is heavily based on the Royal. There’s nothing like soaking up the ambiance for inspiration!
Posted by Gabriele Wills at 12:17 PM 6 comments: 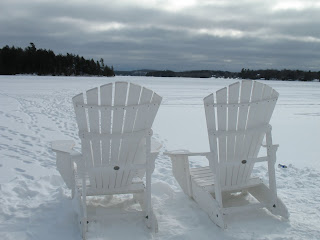 Winter on the lake is snow-shrouded silence. There’s no lapping of waves, no raucous cry of gulls or haunting call of loons. There’s no splashing of swimmers or drone of motorboats, only the rude roar of the occasional snowmobile as it rips across the white expanse of solitude. Trails of footprints beckon the brave to venture onto this ice-bound tundra as snow broods in the skies above. Two Muskoka chairs perch on the edge of a dock and dream of summer.

What you can’t see in the photo above is that there is open water on either side, caused by the turbulence of bubblers that keep ice from forming and damaging the docks. Some people use them around their boathouses as well. Ice can be deceptive - feet thick in some places and safe enough to drive cars across, and yet dangerous in others, where unseen cracks have formed or currents roil beneath a thin sheet. And every year there are people - snowmobilers mostly - who break through. Not far from this spot a mother and daughter drowned last winter while horrified family and friends on snowmobiles right beside them watched helplessly. I have crossed lakes on snowmobiles, but never felt comfortable doing so, especially since I’ve encountered frighteningly soft ice while skiing on a lake in bitter cold, which is obviously no guarantee of safety.

So it always surprises me when I hear of people who live on these islands year-round. In the Muskoka of a century ago, the wealthy often had caretakers who stayed over the winter to look after the property, and apparently some still do. I expect that these people are no longer so isolated, but in the days before snowmobiles and even roads around the perimeter of the lakes that now connect to towns and villages, it would have been a challenge to over-winter here.

After all, the creaking of frozen branches and distant howling of wolves is sometimes all you hear in this muffled and windblown black-and-white world.
Posted by Gabriele Wills at 11:17 AM 8 comments: 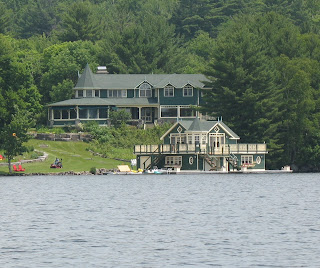 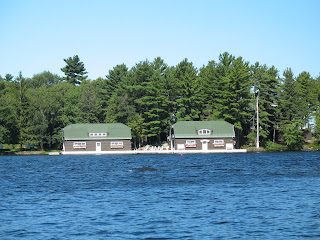 As for me, I can delight in designing boathouses circa 1919 for my characters, and vicariously enjoy the experience of staying in one.
Posted by Gabriele Wills at 9:50 AM 4 comments:

What cats do while you're sleeping 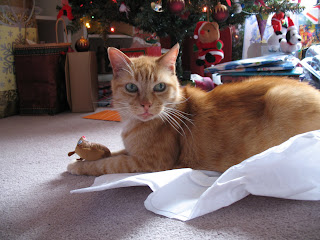 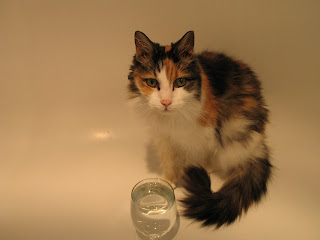 My late cats, Cally and Gingy, spent many hours sitting on my desk or hovering nearby while I wrote and created websites (a former part-time business). I realized later that they had been surreptitiously studying me, for I discovered that they had put up their own webpage! Here’s what it said:

Greetings, fellow cybercats! We are Cally and Gingy, two high-tech cats with attitude. Here are some useful, cat-tested tips for getting those people you own to do what you want.
• Give them rub-againsts - people need to feel privileged by your attention - it's also a good way to brush off excess fur.
• Reach up and pat them on the arm to tell them you'd like some roast beef, too (or whatever looks appetizing from the dinner table).
• Turn up your nose and strut away in a dignified huff if they give you something really vile to eat, then snatch a meal outside. (We call that fast food!)
• Don’t be greedy - sometimes it's a good idea to share your spoils - women especially shriek with joy when you bring them a mouse.
• Be unpredictable - ambush them from under a couch or dash down the stairs ahead of them - just don't let your people become complacent.
• Practice the fine art of studiously ignoring them - especially if they think you're exhibiting dog-like qualities of devotion.
• Demonstrate your superior decorating skills - keep knocking the ornaments off the Christmas tree until they get it right.
• Establish your territory early - choose the best chair in the house as yours and make sure you leave lots of fur behind so everyone knows it.
• People like routine - sit in the same spot every day to demand your bowl of milk - they soon get the message.
• We hate resorting to this one, but if they're slow to clean your litterbox, use a potted plant.
• Don’t let them fool you with so-called scratching posts - the back of a couch or chair provides a much more satisfying place to exercise your claws.
Be firm and consistent. It may take a while to train your people, but you'll win in the end, and they will become your devoted slaves. Especially if you give them one of your innocent looks and enigmatic smiles. Purrrow!