She was the fastest luxury liner on the oceans, and the passengers who boarded the Lusitania in New York on May 1st, 1915, included Alfred Vanderbilt, one of America’s richest men, Lady Allan, wife of Canadian shipping magnate Sir Montague Allan, along with their two teenaged daughters, and Josephine Burnside, daughter of mercantile millionaire Timothy Eaton, with her twenty-year-old daughter. But few of them would survive that last voyage.
The Great War was raging in Europe, and tensions had been running high ever since the German Embassy in New York issued a warning to British ships and their allies. But the passengers had been assured that this record-breaking ocean greyhound could outrun any German submarines, and that the British navy would provide safe escort into Liverpool. No one thought that the Germans would attack a passenger ship carrying women and children. But few on board knew that armaments were part of the cargo, making the ship a legitimate target. 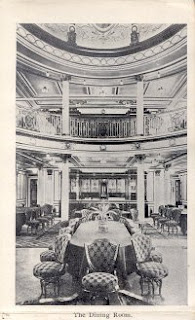 It was a sunny afternoon on the Irish sea on May 7, 1915, just hours away from docking at Liverpool, when some of the first class passengers leaving the sumptuous dining room noticed a torpedo slicing through the calm blue water towards them. The Lusitania sank within 18 minutes.
It was amazing that 761 of the 1,959 aboard survived - although very few of the children - many of them immersed in the frigid Irish Sea for two or more hours. Some who were thought to be dead suffered from hyperthermia, but were able to be revived.
Of those first class passengers mentioned earlier, only Lady Allan and Josephine Burnside survived. More than 900 bodies were never recovered, including Alfred Vanderbilt’s, whose family had offered a $5000 reward.
There are many questions still not clearly answered, including why the British navy had not provided the promised escort, and why the ship was running at such reduced speeds in dangerous waters, thereby becoming a sitting target. See Diana Preston’s book, Lusitania: An Epic Tragedy, for a gripping account of this disaster. And join my characters aboard that ill-fated ship in The Summer Before The Storm.
Posted by Gabriele Wills at 10:54 AM