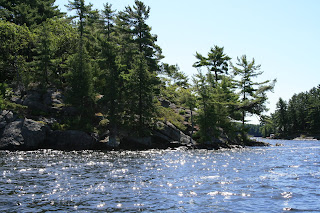 In 1928 when poet Dorothy Livesay was 19 and a student at the University of Toronto, she spent a month in Muskoka helping her cousin, who was the director of a theatre on Tobin Island. It was part of the “Muskoka Assembly” of the Canadian Chautauqua Institute. Founded by Methodist minister Charles Applegath in 1921, the Assembly sought to combine spiritual, educational, and cultural enrichment in a magnificent setting that also encouraged healthy outdoor activities like swimming, golf, tennis, and canoeing. Dorothy, wanting to feel more at one with nature, would go off blueberry picking in the nude with her friends. For her this was just an extension of the then-popular Theosophy, a philosophy that combined Eastern and Western spirituality and mysticism, in which God was nature and beauty, and man, a part of this natural world.
Visitors stayed at the Epworth Inn (later Wigwassan Lodge), while some - clergy mostly - also built cottages on the 200 acre property that stretched along 2 miles of shoreline. In addition to classes and lectures, there were entertainments, which included plays, masquerades, and sunset cruises.
Applegath also sought to promote Canadian literature and music, so recitals and concerts were performed, and famous literary figures like Bliss Carman and E. J. Pratt spent weeks there not only sharing their works, but also being inspired by the picturesque, rugged beauty surrounding them. By 1928, the Muskoka Assembly had become known as Canada’s Literary Summer Capital. Unfortunately, the Depression took its toll on this innovative endeavour.
So it’s exciting to hear that the Muskoka Lakes Music Festival is reviving the Chautauqua, including the Reading Circle. The public is being asked to submit suggestions for this summer’s 5 “Must Read” books by April 31st. Find out more here about the 2010 Muskoka Chautauqua, which will be held at Red Leaves (J.W. Marriot), not far from the “enchanted island” that once offered sustenance for the mind, body, and soul.
In my Muskoka Novels, The Summer Before The Storm and Elusive Dawn, I’ve very loosely based “The Colony” on the Canadian Chautauqua, albeit pre-WW1.
Posted by Gabriele Wills at 2:27 PM