Please visit my new blog, The Muskoka Novels, where I will be posting weekly photos, historical tidbits, and musings about writing. This blog is now archived.

Posted by Gabriele Wills at 8:06 AM No comments:

Long before I ever set foot in Britain, I wandered the bleak, forbidding Yorkshire moors with Catherine and Heathcliff, explored the ancient byroads of Thomas Hardy’s Wessex, and was captivated by Daphne du Maurier’s Cornwall.  How thrilling, then, to do a literary pilgrimage on my honeymoon.

So convinced was I that every fan of Emily Bronte’s classic novel must want to visit Top Withens - the ruins of a farmhouse which supposedly inspired Wuthering Heights - that I was pleasantly surprised there wasn’t a highway to the door and a McDonald’s and souvenir shop flanking it. In fact, my husband and I trekked across miles of empty moorland on a dirt path to get there, encountering only a few sheep en route. How wonderful that the landscape had hardly changed since Emily roamed her beloved moors, and how easy it was to imagine the ghosts of Catherine and Heathcliff still lingering.

Jamaica Inn on brooding Bodmin Moor was the perfect setting for the sinister wreckers and smugglers Daphne du Maurier had instilled in my imagination.  On a more recent visit, I was saddened to see that a motorway now cleaved the moor   – and the once-haunting atmosphere  - and Jamaica Inn had expanded to cater to highway travellers. But you can still stay in the ancient coaching inn, as du Maurier did in the 1930s.

Another literary excursion took my family through the breathtaking Yorkshire Dales so lovingly described by James Herriot. The area is known as “Herriot Country”, and brochures also list the locations where the popular BBC series, ”All Creatures Great and Small”, based upon his novels, was filmed.

Like millions from around the world, we’ve travelled to Prince Edward Island to explore the charming landscape of L.M. Montgomery’s endearing Anne of Green Gables and other tales. Fans of her adult novel, The Blue Castle, are also drawn to Muskoka, which so enchanted Montgomery during a 1922 holiday that she set her only non-PEI novel there.
As an author, I’ve been delighted to hear from fans worldwide that they look forward to visiting Muskoka some day, and others who have been seeking the locations of scenes in my novels, The Summer Before the Storm, Elusive Dawn, and Under the Moon.

Last year had the pleasure of taking German relatives on a tour. Already enthralled by the unfamiliar cottage culture they had read about in my books, they were awed by the unique boathouses, grand mansions and cozy cabins, antique launches and regal steamships, and the rugged beauty of the lakes.  Visiting the Muskoka Boat and Heritage Centre added another interesting dimension for them.  Smitten, they wanted to stay longer and will be returning at the first opportunity.

So literary tourism is a joy for fans, and surely a boost to the local economy.  At the request of Muskoka Tourism, I’ve prepared a “Muskoka Novels Tour”, which directs fans to various locations used or fictionalized in the books.  (It should be on the Tourism website by summer.)

Muskoka will undoubtedly work its usual magic on newcomers. 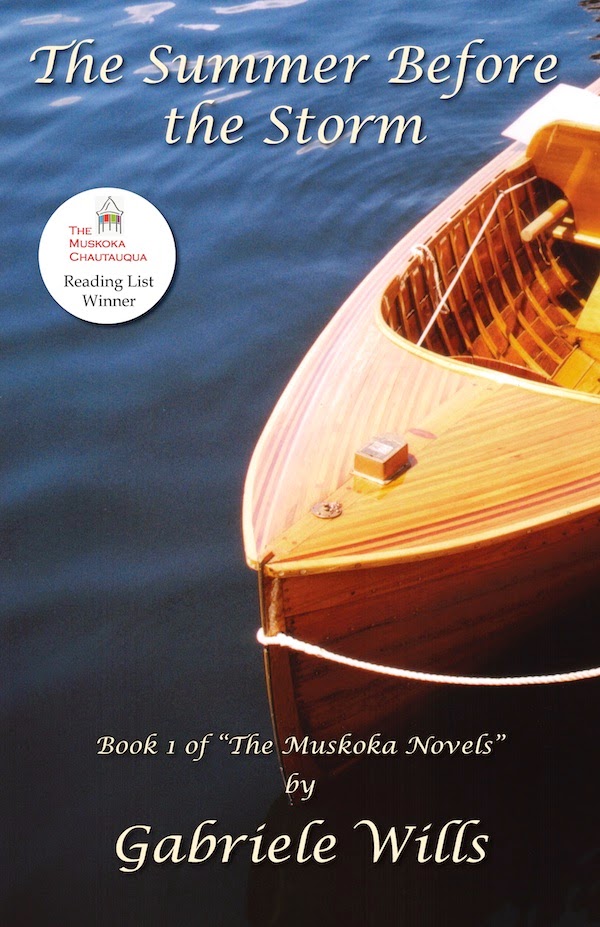 "It was the whisper that started their war. That's how many at the table that evening would recall the summer of 1914."

Posted by Gabriele Wills at 6:47 PM No comments:

The Age of Elegance Goes to War

In remembrance of The Great War during this centenary year, my new blog will explore the intriguing social history of that tumultuous time. Please visit The Age of Elegance Goes to War.
Posted by Gabriele Wills at 7:52 PM No comments:

Thanks to historical fiction author M.K. Tod for inviting me to do a guest post on her blog - A Writer of History. I discuss how the obscure and quirky facts I uncover in my research inspire characters and plots in my novels.
Posted by Gabriele Wills at 9:41 AM No comments: 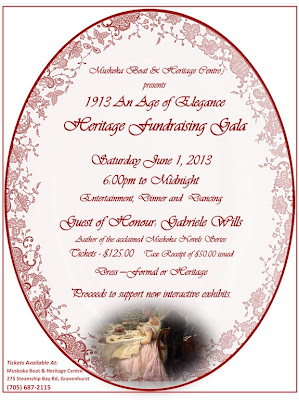 Tickets are on sale for the Muskoka Boat & Heritage Centre's Fundraising Gala,  June 1, 2013 - dinner, dancing, and entertainment. Come in period costume if you like!
I'll be giving a brief presentation about Muskoka's Age of Elegance. Hope to see  you there! For more information, visit this site - segwun.com
Posted by Gabriele Wills at 11:45 AM No comments: 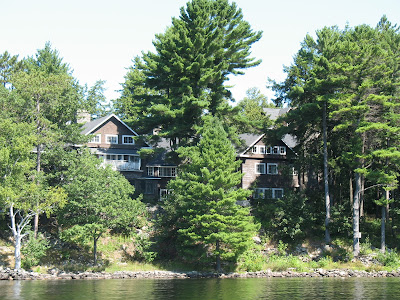 This is Buck Island, one of the original cottages of “Millionaire’s Row” near Beaumaris on Lake Muskoka, built around the turn of the last century. Tucked away in the trees, it’s difficult to appreciate its size: it boasts 14 bedrooms, 8 baths, many en suite, 8 fireplaces, and a miniature house in the attic for the children. The once lush gardens, maintained by a staff of 10 full-time gardeners, were renowned, drawing admirers from around the lakes.

The Beaumaris area was also called “Little Pittsburgh”, since many cottagers were wealthy American industrialists, financiers, and tycoons from Pennsylvania. A million dollars bought a lot in the days when the average wage in North America was $490 per year! Women teachers in Canada were paid only $246 annually, while male teachers earned nearly double that. Little wonder that millionaires could build lavish summer homes and retain dozens of servants.

In my Internet travels, I just happened to notice that this historic summer estate on Buck Island is for sale. It can be yours for a mere $3.9 million. To those who don’t know Muskoka, this may seem like a lot of money, but many cottages sell in the multi-millions, although few have such a rich history. And you would own the entire island. If you’re interested, here is the Real Estate listing. Dream on!

Posted by Gabriele Wills at 9:56 AM 3 comments: